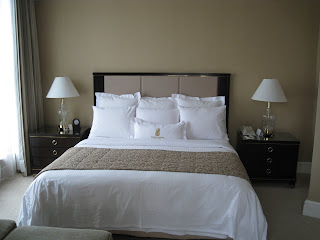 Ritz-Carlton is known for quality and for having one of the best hotel chains in the world. Their rates is always among the highest in every place they are based. In Kuala Lumpur they one of the hotels with highest rates, but because of the weak Malaysian currency, this is actually the cheapest Ritz-Carlton hotel in the world. My first impressions of this hotel were not very good, I contacted the hotel by e-mail 6 times in 5 days before I arrived and all my e-mails were ignored. On the day of arrival I called them from Mandarin Oriental and asked them to reply to my e-mail, I had to call 3 times before someone finally responded to my e-mail with questions about the hotel which was important for me to get answered before I arrived. Unacceptable for a Ritz-Carlton hotel.

I stayed in their standard deluxe room, and it was not up to my standards. First of all, there is no flatscreen Tv even though their website describes the deluxe rooms with a high-definition Tvs. I complained about this and was told they are going to replace them with flat screen Tvs at the end of 2010. In my opinion, they should have done it five years ago. The service includes a butler who was good, but far from best butlers I’ve experienced, but good service. The service in this hotel is good, but not good enough for the name of Ritz-Carlton.

The gym is open for 24 hours, and while it’s not very large, it’s updated with the newest technology and is top class. The spa looked nice and is located in a separate building called the wing. 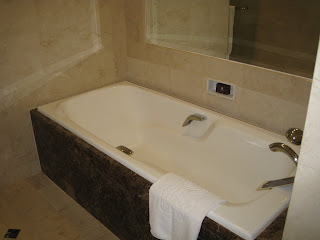